Poll Suggests Automation Could Solve 85% of Your Document Control Issues 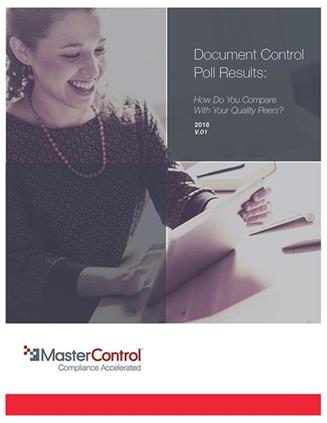 The sophistication and value-added benefits of automated, integrated document control management tools available to manufacturers in the life sciences has come a long way since software solutions were introduced in the 1980s on 5 1/4-inch floppy disks.

In today’s ever-changing regulatory landscape—whether it be pharma, medical devices, biologics or some other type—a robust, electronic document control system is a critical component to producing safe and effective products efficiently and effectively. The absence of such a tool can slow down the time it takes to get a product to market. That can translate into the loss of millions of dollars in potential profits, a cost and setback that many companies would struggle to recover from.

However, if a new poll is any indication, manufacturers’ current document control systems practices and usage has a long way to go in catching up with the 21st century technological solutions available to them.

Houston, we have a problem …

A recent poll entitled, “Document Control Poll Results 2018: How Do You Compare with Your Quality Peers?,” was recently conducted by MasterControl, a leading provider of enterprise software solutions that enable life science and other regulated companies to deliver life-improving products to more people sooner. Available to respondents April to October 2017 on MasterControl’s public website, the anonymous poll aimed to take the pulse of quality professionals’ document control systems usage and gauge their thoughts on their organization’s document control practices. Each of the six poll questions received a range of 106 to 244 respondents.

When asked to identify their biggest document control problem in their organization (Poll Question #1, below), a whopping 85 percent of respondents’ answers indicated that document control software would solve their most significant issue, including those with a lack of resources, knowledge/understanding, organizational cooperation and those currently using ineffective or inefficient systems. More specifically, 30 percent said an inefficient and/or an ineffective was their largest concern while another 20 percent said it was a lack of knowledge and understanding about the importance of document control. 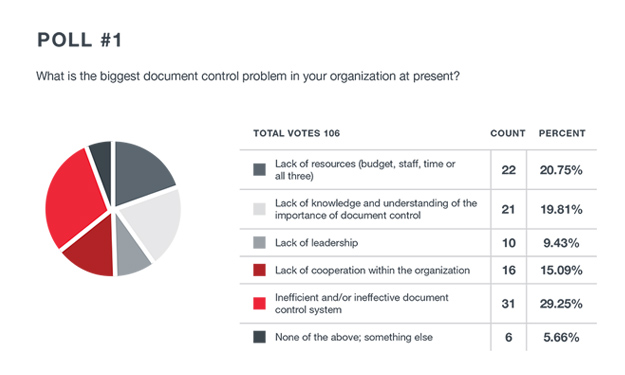 Not to put too fine a point on it, but that means that the companies of all but 15 percent of respondents’ organizations could stand to eliminate their most significant document control problems by the implementation of an automated document control system. 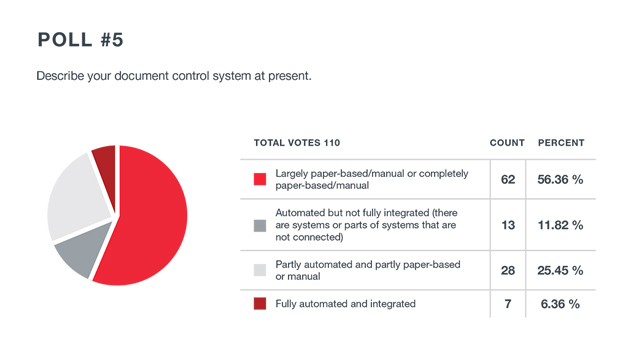 Document control is a team sport

The poll also showed that most life science and other regulated companies allocate only a very small portion of their staffing to document control responsibilities. When asked how many individuals in the company were responsible for document control (on a full-time and part-time basis, including consultants), nearly 38 percent said that two to five people had that charge. Thirty percent said only one person was tasked with document control duties, and nearly 10 percent replied that no one in their company had that obligation.

Document control functions best when there is large scale buy-in and participation from all members of the manufacturing team. A powerful doc control software solution connects other processes to enable seamless quality management and allows users to collaborate in a secure and real-time environment. Authorized users can add their input any time from virtually anywhere, so physical location will no longer cause delays in collaboration. 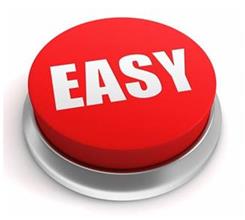 It’s become a cultural meme, but Staples office supply’s “Easy Button” of TV ad fame is an apt analogy when it comes to document management systems. As most are familiar, the over-sized circular red button emblazoned with the word, “easy,” when pushed, magically solves any problem in an instant, making alternate, outmoded and painfully laborious solutions a thing of the past.

Replacing your manual, paper-based, non-integrated document control system with a powerful, 21st century automated doc control software solution is akin to hitting the “Easy Button.” It offers manufacturers in a regulated environment a suite of tools at their fingertips for a more effective and efficient way of getting your products to market with fewer compliance hiccups.