How Supervillains Could Benefit From a Manufacturing Operations Solution 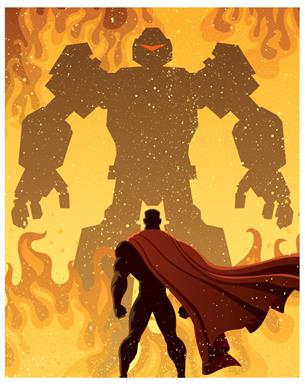 Supervillains all have a lot in common. Their traits usually include narcissism, maniacal laughter and some delirious need to enforce a system of indentured servitude upon the whole human race. They’re also always in a hurry. Their minions never seem to move fast enough to complete production on whatever odious weaponry needed to enforce their tyrannical objectives.

Consequently, it’s that sense of urgency that usually ends up derailing their schemes. Haste causes process errors, miscommunications and production setbacks. Under these circumstances, evil plots are easily thwarted by whichever superhero is on duty. It’s quite possible that supervillains could improve their odds if they used better manufacturing management technology.

A long time ago in a Star Wars movie far, far away, the Galactic Empire labored to construct a new Death Star (Death Star II) in the wake of having the previous superweapon blown out from under it by the Rebel Alliance. When construction fell behind schedule, Darth Vader was sent by Emperor Palpatine to personally oversee the project.

When he arrived on the shop floor, Vader immediately started applying his inherent people skills and Six Sigma training to boost workforce morale and increase productivity. Workers tend to be more motivated knowing their next breath literally depends on them meeting a deadline. Vader got right to work reviewing status reports, tracking supply chain productivity and probably using the Force to send design specs and spreadsheets to the printer. Meanwhile, Emperor Palpatine also arrived on board the Death Star to make sure he and Vader were sufficiently duplicating their efforts.

While Vader and Palpatine were busy manually managing the Death Star construction and negotiating a contract and sign-on bonus to bring Luke Skywalker over to the Dark Side, they overlooked critical gaps in other parts of their enterprise. In particular, the cybersecurity vulnerability that allowed the Rebel Alliance to infiltrate the control bunker, take down the defense shields and obliterate yet another Death Star.

If the Empire had implemented manufacturing operations management technology, Vader and Palpatine would have had access to and full visibility of product life cycle management data and work in progress (WIP) activities – not only on the Death Star, but across their entire galactic enterprise. They wouldn’t have needed to book travel arrangements and spend time coming up to speed on the project status. With automated workflow management functionality, ground personnel could have immediately shared critical data and status updates to Vader and Palpatine about the security breach. Vader could have authorized a change control process that redirected more resources to the malfunctioning bunker site.

Predictive Analytics Could Have Kept Lex Luthor on Task

DC Comics’ perennial supervillain, Lex Luthor, wasn’t driven by typical bad-guy motives of obtaining money or power – he already had plenty of both. He just wanted to take down Superman. In “Batman vs. Superman: Dawn of Justice,” he first attempts to frame Superman for gunning down a group a terrorists in Africa, as well as for the bombing of the U.S. Capitol during a Congressional hearing – of course, neither act was Superman’s M.O.

Not satisfied with those outcomes, he helped orchestrate the Batman/Superman bout with odds-on favorite going to Batman and his secret stash of kryptonite. Despite anticipating that Batman would prevail over the Man of Steel, Luthor still set out to create the kryptonian-armed, anti-superhero monster, Doomsday. It was implied that by using his own DNA to reanimate the creature, Luthor might be able to retain some level of control over it.

Luthor’s problem was he didn’t think long term or apply any level of strategic planning with his schemes. Instead, he wasted time and resources on poorly conceived and rushed operations that failed to deliver results. Then, he simply moved on to the next ploy without performing any type of data analysis.

Using operations management technology, Luthor would have had more consistency throughout his processes and benefitted from comprehensive, up-to-date data and device history records. Then, he would have quickly realized that he would have as much of a chance of controlling Doomsday as the Hulk has of becoming an Olympic figure skater.

Furthermore, an automated operations management solution would have enabled Luthor to complete more effective predictive analytics. The valuable risk management insight gleaned from this resource would have revealed that all of the evil plots and criminal acts would easily be traced back to him. Whether that would have compelled him to rethink his actions is anybody’s guess.

Loki, the adopted son of Odin and dubbed the “god of mischief” by hammer-wielding half-brother, Thor, seemed intent on making villainy a refined discipline. In the first Avengers movie, he was not only determined to become ruler of Earth, he set out to do it with fashion and style.

In a nutshell, he stole the Tesseract, usurped mind control over a few S.H.I.E.L.D. personnel, and enlisted military support from the alien Chitauri to wipe out the Earth – all without getting his hands dirty.

Initially, everything seemed to go according to Loki’s business model. He was able to assemble an interdimensional portal, which allowed the army of the Chituari to commence their aerial assault. However, Loki’s strategy began to fall apart when he attempted to manually manage the ground war operation himself. Functioning in a siloed environment, he was unable to effectively communicate with his Chitauri stakeholders regarding process variations and resource optimization. Essentially, the Chitauri’s military troops were unable to match the Avengers’ combat skills and agility.

While engaged in a squabble with Thor, Loki busily expedited the workflow and continued to order more personnel resources from his supplier, the formidable Thanos – all seemingly concentrated in the area where the Avengers and U.S. military were positioned. Meanwhile, Iron Man was able to slip through the portal and deliver a nuclear warhead on the doorstep of the Chitauri mothership. This resulted in a forced shutdown of the Chitauri’s entire military supply chain.

Ultimately, Loki’s downfall was caused by gaps in his workflow management processes. A manufacturing operations solution would have given Loki full visibility of the entire operation, as well as his competition’s strategy. With the automated technology, he could have gathered and shared critical work-in-progress (WIP) data in real time. This would have given him insight to dispatch resources to divert the atomic weapon and mitigate the costly production bottleneck it caused.

Loki’s downfall was caused by gaps in his #WorkflowManagement processes. #, says @mastercontrol http://bit.ly/2BBnSUw

For whatever reason, supervillains seem to insist on sabotaging their own malicious exploits by failing to use the right technology that would enable them to streamline and accelerate their processes. Using manufacturing operations software, such as MasterControl’s Manufacturing Excellence Solution, supervillains could build superweapons faster and more efficiently. Then they would stand a better chance to turn the tables on those do-gooder superheroes.