As was widely predicted, a bottleneck has developed in the process for manufacturers to transition from valid CE certificates for devices issued under EU directives (EU Medical Device Directive 93/42/EEC (MDD) and EU Active Implantable Medical Device Directive 90/385/EEC (AIMDD)) to the European Union Medical Device Regulation (EU MDR), before those certificates expire. May 26, 2024, is the latest date that CE certificates issued under those directives will remain valid. After that date, devices that require a valid CE certificate but have not yet completed transitioning to the EU MDR (legacy devices) will no longer be in compliance with the requirements of the EU MDR and may not be placed on the EU market, which would result in shortages of the availability of those medical devices on the EU market.

Understanding the Evolution of EU MDR and EU IVDR

In August 2022, the Medical Device Coordination Group (MDCG) issued a position paper (MDCG 2022-14) on the transition to the EU MDR and the European Union In Vitro Diagnostics Regulation (EU IVDR), adopting a list of 19 actions with the aim to increase notified body capacity and advance manufacturers’ progress, without reducing the requirements and without requiring any change in the law. However, as of December 2022, it was estimated that legacy devices covered by around 23,000 certificates issued under the previous directives had not yet transitioned to the EU MDR.

On December 9, 2022, the European Commission presented a proposal outlining elements of proposed changes to the legal requirements of the EU MDR and the EU IVDR to extend the transition time for legacy devices, based on the input received from national experts and stakeholders. On January 6, 2023, the European Commission announced the adoption of that proposal, which now needs to be adopted by the European Parliament and council and will come into force on the day of publication in the Official Journal of the European Union.

The amendment to Article 120 of the EU MDR extends the transitional period for legacy devices with revised deadlines, depending on the risk class of the device, of December 31, 2027, for the higher risk class III and class IIb devices, and December 31, 2028, for lower risk class IIa and class I devices that need the involvement of a notified body in the conformity assessment process. For Class III custom-made implantable devices, a transition period until May 26, 2026, will be introduced.

These extensions will be dependent on the fulfillment of several conditions and the extension of the validity of current MDD and AIMDD CE certificates that would only apply to devices:

Notified bodies will not be required to change the dates on individual CE certificates.

The amendment also includes the removal of the “sell-off” time periods defined in Article 120(4) of the EU MDR and Article 110(4) of the EU IVDR which will allow devices placed on the market before the end of the transition period to continue to be made available on the market without a legal time restriction.

5 Steps to Aligning With the Extension of EU MDR Requirements

So, under the extended transition period for legacy devices, what actions must manufacturers take to continue to meet the legal requirements of the EU MDR?

If the CE certificate has expired before the amendment comes into force, the extension may still be applicable if the manufacturer has signed a contract with a notified body for the conformity assessment of the device(s), or the requirements of Article 97 may be applied. Guidance for the application of Article 97 was issued by the MDCG in December 2022 in the MDCG 2022-18, "MDCG Position Paper on the application of Article 97 MDR to legacy devices for which the MDD or AIMDD certificate expires before the issuance of a MDR certificate.” Articles 94 and 97 of the EU MDR currently make provision for competent authorities (CA) to allow devices with expired MDD or AIMDD certificates to remain on the market for a defined period until the device has transitioned to the EU MDR. The CA will be required to perform an evaluation of the risk posed by the device to the health and safety of patients, users, and other persons.

Apart from removing the “sell-off” date for the EU IVDR, it is not clear how the proposed changes will impact the EU IVDR in the future.

The proposals outlined above indicate that manufacturers must be able to provide evidence of taking steps to transition to the EU MDR before the current valid CE certificates expire, which includes having a signed contract with a notified body and a QMS fully compliant with the EU MDR. Meeting the EU MDR QMS compliance requirements may be made easier by using quality compliance software.

Diane Chinn, senior regulatory consultant with CGH & Associates, is a consultant to the medical device and in vitro diagnostic medical device industry in quality systems implementation and compliance, international regulatory submissions, technical documentation review and writing, sterilization, performance, and clinical evaluations, and biocompatibility assessments. She has over 30 years of experience in quality assurance, quality control, and regulatory affairs for global markets.

Diane began her career by qualifying and working as a registered medical laboratory scientist for seven years. This was followed by over 15 years of working in academic research on infection and disease models, vaccine efficacy studies, and developing diagnostic assays for mycobacterial diseases. During this time Diane also completed a DipSci and MSc in biotechnology. Diane has presented papers at international conferences on M. bovis and has co-authored several peer-reviewed articles. 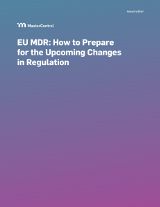 EU MDR: How to Prepare for the Upcoming Changes in Regulation