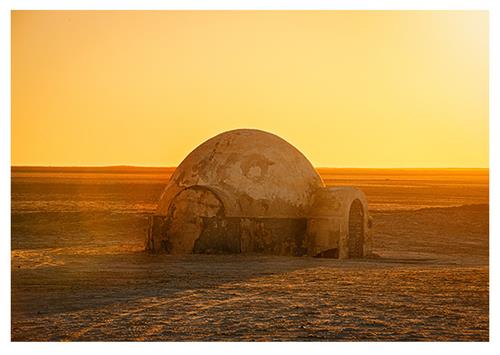 Whether you’re a Star Wars fan or not, you may have heard that Disney released the ninth and final episode of the so-called Skywalker saga of films at movie theaters worldwide over the holidays. “Star Wars: The Rise of Skywalker” received lukewarm reviews as the final chapter in a jumbled sequel trilogy that has split the fan base as to whether the newer flicks lived up to the originals.

The movie wraps up a lot of loose ends from the trilogy as well as from the preceding six films beginning with 1977’s groundbreaking “Star Wars: A New Hope.” But to no one’s surprise (spoiler alert), “The Rise of Skywalker” ends with the gutsy but decimated good guys led by Jedi prodigy Rey triumphing over the seemingly invincible but fatally flawed antagonists.

Was the film the best part of December 2019? As Jedi master Yoda would respond, “No, there is another.” On the exact day that “The Rise of Skywalker” was released – Friday, Dec. 20 – a prettily-wrapped Christmas gift appeared under the collective tree of the medical device community. On that day, the U.S. Congress passed, and President Donald Trump signed into a law, a spending bill permanently repealing the 2.3% medical device excise tax.

“This is a great day for American patients, American jobs, and American innovation. The medical device tax is officially history,” said Scott Whitaker, president and CEO of the Advanced Medical Technology Association (AdvaMed).(1) “With the end of this burdensome tax, the U.S. medtech industry can do what it does better than anyone else in the world: develop life-changing innovations that save and improve patients’ lives, and create high-paying, high-tech jobs to keep the American economy booming.”

Congress (not to be confused with the Imperial Senate) initially passed the device excise to help pay for health insurance market changes with the passage of President Barack Obama’s Affordable Care Act (ACA) in 2010. A tax on revenue rather than profits which first went into effect in 2013, the excise tax was particularly painful for medtech startups. That’s because newer companies typically might not initially turn a profit but still find themselves in the red with the Internal Revenue Service (IRS).(2) With 80% of the medical device industry comprised of small businesses with fewer than 50 employees, the tax’s impact to startups was “as if millions of medtech startups suddenly cried out in terror and were suddenly silenced.”

More significantly, a nonpartisan Tax Foundation report stated that the return of the excise tax in 2020 (it was suspended twice between 2016-2019) would result in a loss of 21,290 U.S. medtech jobs and a decrease in $1.74 billion in the country’s gross domestic product (GDP).(3) Absent any legislative action, the tax was scheduled to be reinstated beginning in 2020.

“Congress has suspended the tax for longer than it was ever actually on the books, and here’s the reason why: Simply put, the tax was a disaster,” Whitaker said in an article in RealClearPolicy. “… It killed jobs, slowed medical progress and threatened new frontiers by saddling entrepreneurs entering the market.”

The bipartisan congressional effort that repealed the tax in the Dec. 20 spending bill was the culmination of 10 years of lobbying efforts by organizations like AdvaMed and the Medical Device Manufacturers Association to build support for its removal, according to an article in MedTechDive.(4)

Congress’ cancelation of the device excise tax is a substantial win for the medical device sector. As an AdvaMed report and survey noted, the tax resulted in the following impacts to the industry:(5)

Another key area where device companies are now in better position to invest is in their production data systems. As technology innovations continue to change the way the industry becomes more agile and efficient, companies can implement digital solutions to stay one step ahead of the competition. Device makers can no longer afford to use disconnected, disparate paper-based or hybrid systems to manage their data and monitor quality when more cost-effective, automated solutions that offer greater operational efficiency are available. A robust digital quality management system (QMS) offers the real-time, data-driven intelligence that can improve lot quality, help differentiate you from competitors, and improve your speed to market.

Like the Rebellion ultimately defeating the Empire, the medtech sector has achieved victory in the long campaign to repeal the U.S. device excise tax. The much-needed financial relief frees up medical device manufacturers to invest more resources in R&D, staff hiring, new facilities and state-of-the-art digital data solutions that will increase product speed to market in a competition-filled 21st-century marketplace.

Mike Rigert is a content marketing specialist at MasterControl's headquarters in Salt Lake City, Utah. He has nearly a decade and a half of experience creating marketing and journalism content for the tech industry, news media, and higher education. Rigert has written a wide gamut of content types from feature magazine articles to industry white papers and technical product documents to press releases and blog posts. At MasterControl, a portion of his duties include serving as editor of the organization’s prospect blog, GxP Lifeline. Rigert holds a bachelor’s degree in political science with an emphasis in international relations from Brigham Young University.