Cheers to Craft Beer: A Tradition of Quality, Innovation and Community 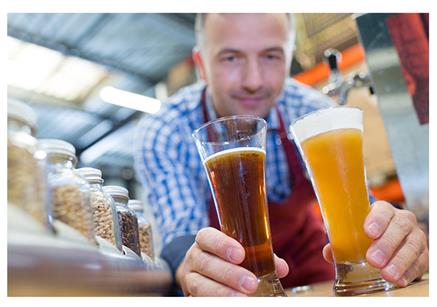 For millennia, people have brewed beer. Ancient societies were organized around it. It was the centerpiece of community celebrations. It provided nourishment for both body and soul, even helping prevent disease epidemics. And while beer has evolved over time, its cultural purpose of enabling shared social experiences remains the same. In addition to the age-old quest for camaraderie, today’s beer drinkers look for innovative flavors, local ties and the highest possible quality in their brews, which is exactly why so many are turning to craft beer.

What Is Craft Beer?

The term craft beer is everywhere these days, with bars, restaurants, liquor stores and breweries alike jumping on the craft bandwagon. Most use the term to differentiate more full-flavored, unique or local brews from “traditional” American lager-style beers bearing labels from the big brands like Budweiser, Miller or Coors.

As long as a beermaker adheres to these criteria, the beer it produces is considered craft. Some have also suggested that craft brewers must only use the traditional ingredients of water, yeast, malt barley and hops. But most craft brewers aren’t interested in limiting themselves in their exploration of beer flavors, aromas and textures.

In fact, craft brewers are known for their experimental and innovative approach to beer, often infusing the basic beer components with herbs, spices, fruits and other ingredients, or using new production techniques to achieve novel results. While BA currently recognizes more than 150 distinct beer styles, craft brewers often stray from these styles altogether.

“The hallmark of craft beer and craft brewers is innovation,” according to BA’s website. “Craft brewers interpret historic beer styles with unique twists and develop new styles that have no precedent.”

This sets them in stark contrast to the larger, more conventional brewers that have dominated the American market for decades with their mostly homogenous, and mostly unchanged product. And it’s also a big part of what makes craft beer so popular with today’s beer drinkers.

Once You Go Craft, You Never Go Back

By the end of Prohibition in 1933, several breweries had consolidated into a few companies that controlled the beer market thanks to their advanced production methods and marketing spending, overwhelming the smaller breweries and pushing many of them out of business. Reaching about 700 shortly after Prohibition ended, the number of breweries in the U.S. was reported to have dropped to just 80 by 1983. The lack of competition in the beer market led to a highly uniform product and very little innovation in beermaking for half a century.

When Congress voted to legalize home brewing in 1978, it paved the way for experimental, small-scale beermakers and led to the first craft beer wave in the early 1980s. The craft beer market continued to grow steadily until the 2000s, at which time more breweries were said to have operated in the U.S. than in any other country. Still, as recently as 2012, two brewing giants, Anheuser-Busch InBev and MillerCoors, controlled nearly 90 percent of beer production in the U.S. 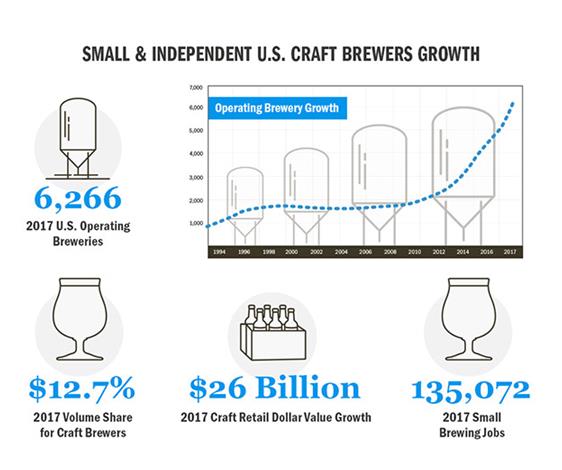 But from 2008 to 2016, even as beer consumption decreased and other industries stagnated due to the economic recession, craft brewing burgeoned. Employment was up 120 percent – in stark contrast to other sectors, craft breweries were employing more people to produce less product, a trend that continues today.

Take Samuel Adams’ latest advertising campaign as a case in point. One of the first American craft brewers to open after craft’s resurrection in the 1980s, Sam Adams recently launched its “Brewed Inefficiently Since 1984” commercials, stating on its website that “[Inefficiency is] important to us because it allows us to prioritize quality and craftsmanship over bottom line profits.”

Though consolidation like that of the beer industry is known for stifling innovation and entrepreneurship, breweries are multiplying, even as sales decline for big-name beers. And though technology and globalization tend to make manufacturing operations more efficient, modern breweries actually require more people to produce fewer barrels of beer.

A heightened focus on the role of human craftsmanship is the central tenet of a new manufacturing movement called Industry 5.0, which emphasizes the importance of uniquely human abilities like creativity, handiwork and ingenuity while letting machines, computer systems and robots automate the more repetitive and mundane production processes.

“The personalized products consumers will demand most and pay most for are products that bear the distinctive mark of human care and craftsmanship – such as fine watches and craft beer,” said Esben Østergaard, chief technology officer and co-founder of Danish manufacturer Universal Robots, in an Enterprise IoT Insights article. “These consumers […] crave the personal imprint of human designers and craftspeople, who produce something special and unique through their personal effort.”

This might also explain why consumers are willing to pay more for their beer, with average prices in 2017 nearly 50 percent higher than just 10 years prior, according to the Atlantic article.

At the 2017 Craft Brewers Conference, a panel of brewery QA experts expounded on what “local” represents to consumers.

“[A] big part of a local good’s appeal is the inherent attribute of quality,” reported an article in Craft Brewing Business. “No one buys local expecting a shoddily created generic commercial product. Hitting that high-quality bar requires an organizational culture that focuses on it.”

The big-name beer brands are also noticing this hyper focus on quality. Within the past few months – specifically during the 2019 Super Bowl – Bud Light launched an ad campaign around this very theme, touting the addition of ingredients labeling on its packaging, and denouncing its competitors for allegedly using corn syrup as an ingredient in their beers.

Big brands aside, there are now more than 7,000 craft breweries in operation as of late 2018, and the competition is fierce. To survive and thrive in such a prolific industry, it is essential that craft brewers deliver on that promise of quality.

Not surprisingly, craft beer is also heavily regulated, with federal and state regulations dictating everything from food and ingredient handling, to testing procedures, to employee training, to the amount of beer that can be distributed per state, to labeling and more.

As with other food and beverage producers, the craft beer industry must adhere to strict quality, safety and compliance requirements and undergo regulatory inspections. Signed into law in 2011, the U.S. Food and Drug Administration (FDA) Food Safety Modernization Act (FSMA) defined alcoholic beverages as food, and thus brought breweries under direct FDA regulation for the first time, after having previously been under the sole jurisdiction of TTB.

Craft beer facilities are exempt from several FSMA requirements, but they must still comply with key parts of the regulation related to staff training, Good Manufacturing Practices (GMPs) and documentation. These rules took final effect in 2016 for large breweries and as late as September 2018 for very small operations.

Building on the generally applicable GMPs, the Good Manufacturing Practices for Craft Brewers (GMPCBs) provide standards that are more specific to brewing facilities, including:

According to BA, GMPCBs are the foundation for any brewery’s quality assurance program. And for most craft brewers, striving for the highest possible quality is a necessary part of their craft.

Essential to the success of any craft brewery is its ability to control these variables and achieve repeatable results. As such, craft brewers often equate quality with consistency. Compliant breweries collect and record data about every batch they produce. But when a batch of beer fails, and it inevitably will, it can be very difficult to pinpoint the exact cause because sifting through copious amounts of data is time-consuming and cost-prohibitive, especially if this data is recorded and stored on paper.

Many craft brewers are turning to electronic batch record (EBR) solutions, machine learning (ML) and quality management software to digitize their data and documentation, analyze the massive volumes of information that they capture for each batch of beer produced, identify the root cause of deviations, see where process improvements can be made, trace and address quality issues more accurately and proactively, and ultimately achieve greater consistency and compliance. Not only is this good for consumer health and safety, but it’s good for business, too.

A Craft That Keeps On Giving

The Atlantic article made an interesting and relevant point when it said “…the triumph of craft beer is not just about a preference for hops and sours. It’s also a story about America’s regulatory history, and how a certain combination of rules can make innovation bloom or wilt.”

All breweries, big or small, must adhere to the applicable regulations. But perhaps what sets craft brewers apart is their realization that compliance with regulations does not guarantee high quality, especially as the notion of quality changes.

Once an outlawed activity kept alive by underground renegade operations during Prohibition, craft beermaking has endured increased regulatory scrutiny, an economic downturn, and Goliath-like competition from some of the biggest conglomerates in the nation.

Yet it thrives. By leaning on new tech offerings to streamline and automate repetitive, mundane and non-value-add activities, and to ensure the highest standards of consistency and quality, brewmasters are able to return their focus to the part of the craft brewing process that matters most: the craft itself.

And that’s something beer lovers everywhere can raise their glasses to.

Beth Pedersen is a technical writer at the MasterControl headquarters in Salt Lake City, Utah. Her technical and marketing writing experience in the enterprise software space includes work for Microsoft, Novell, NetIQ, SUSE and Attachmate. She has a bachelor’s degree in life sciences communication from the University of Wisconsin-Madison and a master’s degree in digital design and communication from the IT University of Copenhagen.