Art Intersects With Inspiring Science Applications at the 2019 Masters Summit 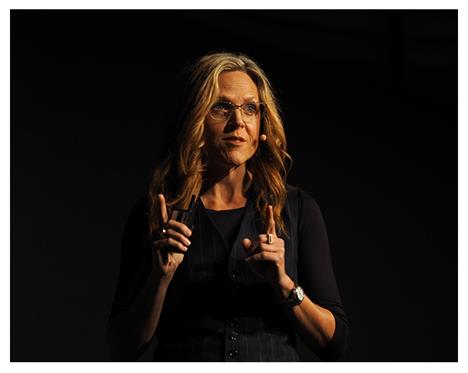 Although the worlds of science and art may seem to have little in common, creative endeavors like origami constructions and musical compositions are more closely linked to practical science applications than we realize, according to two keynote speakers at the 2019 Masters Summit held Oct. 7-10 in Salt Lake City. Pioneering origami artist Robert Lang and independent filmmaker Irene Taylor Brodsky enlightened more than 800 MasterControl customers, partners and employees gathered at the annual event by sharing their personal experiences working in the space where art and technology converge.

Widely regarded as a pioneer in the origami world, Dr. Lang has leveraged his background as an engineer, physicist and R&D manager to bring mathematical principles and the power of technology to the art form. In a keynote presentation on Oct. 9 at the Little America Hotel, he demonstrated to Masters Summit attendees how creative paper-folding techniques can be used to achieve impressive engineering feats.

Although the concepts behind paper folding are timeless, Lang explained how the modern crease-folding technique has provided a systematized approach to design that broadens the art form far beyond the creation of the tiny paper birds and “cootie catchers” made by children. “The step-by-step (crease-fold) process is so systematic that it allowed us to automate it and do it via computer,” he said. The art form changed dramatically when math came to origami, according to Lang.

Wanting to explore this new field of math-based origami more deeply, Lang developed TreeMaker, a technical folding software program that helped spark “a full-fledged battle of the species where everyone was trying to outdo each other by creating ever more complex bugs” in the 1990s. Lang featured several of the complicated patterns generated by TreeMaker and subsequent open-source software programs that have been developed based on its groundbreaking principles. Although the most intricate origami folding patterns can only be generated by computer programs nowadays, Lang said that their true beauty lies in the fact that they’re guaranteed to work. Consequently, computerization has opened new fields of geometric folding and widened the range of utilities that can be derived from origami-rooted folding principles to include many more uses than just elaborate models of animals.

“That application lets us create art, but it also lets us solve real-world, practical problems,” Lang said. “One of the interesting things we found when we started bringing origami into applications is that the same fold patterns show up in very diverse places.” Several examples he used to illustrate that point included the solar array and solar sail used on Japanese Space Agency missions and the foldable James Webb Space Telescope that is scheduled to replace the Hubble Space Telescope in 2021 — all modern technologies that must be limited in size during delivery into orbit yet expandable upon deployment.

Lang showed how the life sciences industry is benefitting from origami principles as well, noting miraculous developments like heart stents that unfold once inside the body, folded DNA strands that can cloak anti-cancer drugs, and the complex folded structures now under development at Northeastern University that mimic human cells and may one day be used to create artificial organs. Origami-based applications are making their way into consumers’ homes, too, as a wave of inventive products like reinforced aluminum cans, decorative lamps and portable kayaks are becoming more widely available.

Lang contended that the driving force behind the folding patterns used in the solar arrays, heart stents and other groundbreaking innovations he showcased is curiosity. “Problems that you explore and solve just for their own purpose — because they are interesting and fun — may very well change a life someday,” he said.

Leading the charge in MasterControl’s “War on Paper,” Lang also shared some fundamental origami folding techniques with Masters Summit attendees in a “Foldathon” activity on the evening of his keynote, proving that paper has far more beneficial — and fun — uses than for documenting quality and compliance information.

Transforming a Disability Into a Superpower

In her Oct. 8 keynote address, Brodsky, an Emmy and Peabody Award-winning and Oscar-nominated documentarian, depicted the life-changing effects that cochlear implants have had on her deaf family members. Her father, Paul, and mother, Sally, who were born deaf, and her oldest son, Jonas, who lost his hearing at four years old, have all undergone cochlear implant surgery.

The filmmaker’s latest release, “Moonlight Sonata: Deafness in Three Movements,” contrasts and compares the experiences of her son, her father and Ludwig van Beethoven, who reportedly was losing his hearing at the time he composed the piece of music for which Brodsky named the documentary. The film premiered at the 2019 Sundance Film Festival and is scheduled to air on HBO later this year.

“It’s a story about three people who figuratively and literally find their voice,” Brodsky said. “It’s about them living with the tools they were given and the choices they were not given.”

Brodsky said that as a documentarian she finds herself drawn to people with disabilities because they have a fundamentally unique human experience. “They have — or they experience — a certain powerlessness,” she said. “I try to reveal how they understand the world. We’re all living in the same space, so I have one goal in mind: to bridge their world with your world. I want to guide my audience into their experience and hear what they hear — or maybe to not hear what they don’t hear.”

When her family was deliberating about subjecting Jonas to the invasive implant surgery while he was still young, Brodsky was told by audiologists that the sooner the device was implanted, the faster his brain would adapt. “That was true,” she said, “but it also doesn’t appreciate what goes into making and supporting this device.”

She extended her appreciation to the work that the Masters Summit attendees and the life sciences companies they work for do each day. “I hope it’s not lost on any of you that you’ve played a part in this story,” she said. “From where I sit, we gave Jonas the implant. But from where you sit, you know these things don’t happen overnight. You know what it takes to develop the basic science behind a product and to bring it to market. Everything you do in that whole prequel part of the story I’m telling you is staggering to me in its complexity. And, make no mistake, it is staggering in its human impact.”

Brodsky was joined onstage by MasterControl CEO Jon Beckstrand and Ed Wertepny, quality systems manager at Cochlear Americas, the medical device company that manufactures the implant Jonas uses. Wertepny discussed some of the new functionalities his company is incorporating into their devices, including a feature that allows users to control the cochlear implant’s processor from their smartphones. “Jonas always uses the iPhone app because it lets him turn mom off and listen to YouTube,” Brodsky joked.

The real gift that developers of medical devices like cochlear implants give to people with disabilities and their loved ones is not technology itself, according to Brodsky. “What you are giving them is a choice,” she said. “And choice is empowering.” To illustrate her point, she played a clip from “Moonlight Sonata” that captured a scene of Jonas choosing to deactivate his implant while practicing piano.

“He didn’t have to hear his mistakes because he could just hear what was in his mind,” she said. “But he also has the implant which literally allows him to get to know his own voice, his place in the world, and where he sits in relation to the rest of us. This choice is profound in its impact on the human experience.”

Unique individuals like Jonas are the vanguard of a new human prototype, according to Brodsky, which is a concept she wrote about in a recent New York Times editorial. “These people are this new type of human that has embedded technology inside their bodies that restores a human sense,” she said. “But they have a choice to tune in to sound or to lean in to silence, and there’s tremendous value in both of those.”

She said teenage Jonas now spends half his time with his implants turned off — “going native,” as her family refers to it — even when he’s playing the piano. “He feels the music, so he can lean in or he can tune in,” she said. “It’s not a disability. It’s a superpower.”

If you’d like to take part in similarly insightful and inspiring experiences while also benefitting from the many educational and networking opportunities offered to quality and compliance professionals at the annual Masters Summit, register now for next year’s event to be held at the Grand America Hotel in Salt Lake City Oct. 19-23, 2020.

James Jardine is the editor of the GxP Lifeline blog and the marketing content team manager at MasterControl, Inc., a leading provider of cloud-based quality, manufacturing, and compliance software solutions. He has covered life sciences, technology and regulatory matters for MasterControl and various industry publications since 2007. He has a bachelor’s degree in communications with an emphasis in journalism from the University of Utah. Prior to joining MasterControl, James held several senior communications, operations, and development positions. Working for more than a decade in the non-profit sector, he served as the Utah/Idaho director of communications for the American Cancer Society and as the Utah Food Bank’s grants and contracts manager.