Editor’s note: This is the second part of a two-part series. The first installment can be found here.

The first part installment in this series examined the benefits of Artificial Intelligence/Machine Learning (AI/ML) and noted the considerations that regulatory bodies are studying for use with AI/ML algorithms. The second and final installment explores the past and current regulations, and summarizes the latest framework proposed by the U.S. Food and Drug Administration’s (FDA).

Regulations Past and Current

While current guidance around AI/ML implementation in medical devices is lacking, the FDA is working to solve the problem. They are in the process of creating a framework for software as a medical device (SaMD) that is practical to implement and covers the requirements for safety and effectiveness.

In April 2019, the FDA published a discussion paper on an outline of a regulatory framework titled, “Proposed Regulatory Framework for Modifications to Artificial Intelligence/Machine Learning (AI/ML)-Based Software as a Medical Device (SaMD) – Discussion Paper and Request for Feedback.” (1)

Also in 2019, the Association for the Advancement of Medical Instrumentation (AAMI) and the British Standards Institution (BSI) released a position paper that identified key considerations in the use of machine learning with medical devices. These centered on autonomy introduced by AI/ML technologies, effects of continuous learning systems that can change their output in response to new and different data, and finally explainability and understandability of the output. As part of the paper, the two groups coordinated with other bodies and suggested further work to standardize the terminology and categorization of AI/ML. Their suggestions included the recommendation to map existing and potential standards with the intent to standardize activities related to AI/ML in healthcare (2).

In February 2020, the FDA held a public workshop to get stakeholder feedback on best practices on AI‑automated radiological imaging software and image acquisition devices (3).

In February 2020, the FDA announced a marketing authorization via the De Novo pathway for the first cardiac ultrasonic software that uses AI to guide users. The manufacturer used a Predetermined Change Control Plan in its application to obtain authorization (4).

In September 2020, the FDA instituted the Digital Health Center of Excellence within the Center for Devices and Radiological Health (CDRH). The center’s focus is on “getting high quality digital health technologies to patients.” (5)

The proposed FDA framework for SaMD essentially seeks to address conditions where the AI/ML is adaptable over time via a controlled process.

As stated in the 2019 position paper, adaptable AI/ML can be expected to be used for:

The adaptation process follows two stages: “learning” through the use of new data and “updating” via deployment of a new algorithm.

Ultimately, this approach is intended to emphasize that manufacturers will need Good Machine Learning Practices (GMLP) that are used to ensure quality is integrated into and maintained within the device over the product lifecycle. Additionally, the framework expects manufacturers to capture real-world data and maintain transparency of that data with the FDA, though the implementation of this is being defined further as part of the FDA action plan.

Importantly, non-device software functions are not subject to the FDA regulations and are not covered by the proposed framework. Specifically, functions intended (1) for administrative support of a health care facility, (2) for maintaining or encouraging a healthy lifestyle, (3) to serve as electronic patient records, (4) for transferring, storing, converting formats, or displaying data, or (5) to provide certain limited clinical decision support are not medical devices and are not subject to FDA regulation.

This is in-line with FDA’s approach to SaMD which is regulating software used for medical purposes that is not part of a hardware medical device. The gap that potentially exists is that a large number of medical devices that could utilize AI/ML will likely involve hardware in some manner, for instance radiology or cardiology devices. Manufacturers can encapsulate the AI/ML algorithm portion as a SaMD separate from the hardware medical device used to obtain the data. But there are cases where the hardware and software are intertwined as the single medical device. For those devices essential elements of the guidance can still be used to establish a plan, such as the Predetermined Change Control Plan, and clearly state the objectives of the AI/ML within the device and whether it is adaptable or not.

The FDA has stated a goal of providing additional guidance for AI/ML based SaMD during 2021. In the meantime, many new medical devices using AI/ML continue to be cleared and manufacturers have begun integrating elements of the framework, such as a Predetermined Change Control Plan, into their submittals, likely expecting this will be an integral part of the upcoming guidance.

Cameron Loper is a senior project leader, systems engineer, and technology analyst with a focus on the Health and Life Science industry. During the course of his career, he has architected, managed the development of, and consulted on dozens of MedTech devices. His core skills are in the development of systems comprising sensors, software, complex algorithms, electromechanical components, and robotics. Cameron has followed the rise and use of artificial intelligence/machine learning techniques within the medical industry and as Digital Health Leader at MPR Associates, he is responsible for engaging the industry to best apply MPR’s AI/ML capabilities. 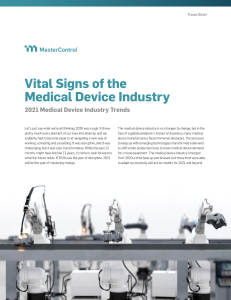