Game-changing tools around big data and advanced analytics are enabling pharmaceutical manufacturers to process unprecedented amounts of data for improved decision making. Yet even as life sciences manufacturers invest heavily in enterprise and plant automation, their efforts are too often impeded by a digital manufacturing gap, where critical production processes remain paper-based and disconnected.

In a recent webinar poll of pharmaceutical professionals(1), 79% of attendees said they are using paper production records – aka batch records or device history records – while 21% reported having some level of electronic production records. To help explain the latter statistic, it’s helpful to understand the ongoing role of paper in life science manufacturing:

We need to remedy the fact that the vast majority of life science manufacturers are still on paper. To support advanced data technologies and to compete in a modern market, manufacturers must close the digital gap on the shop floor.

Digitizing the paper-based production record process can close this gap by creating productive connections between people, processes, and systems throughout the manufacturing process and across the entire enterprise for a holistic view of production data.

All of these systems are generating, consuming, and outputting data, but where’s your data for your production record? It’s locked away, in paper, that’s probably in bankers’ boxes stored in some secure location.

What’s missing is the production record solution, which creates a digital thread that pulls everything together.

By integrating these disparate, but critical, software applications with a fully digital production record solution like MasterControl Manufacturing Excellence, manufacturers can collect data while maintaining data integrity; share data between those systems and functional areas completely, seamlessly, and immediately; and contextualize the data to make better business decisions.

If you look at the manufacturing process as having a beginning, middle, and end, what manufacturers tend to know best are the beginning, the end, and the as-designed middle. The beginning would consist of the inputs – raw materials, work instructions, and operators, for example. The end would consist of the outputs – yield, scrap, paper production record, and finished product, for example. The as-designed middle is the master template and work instructions that document the overall manufacturing process. 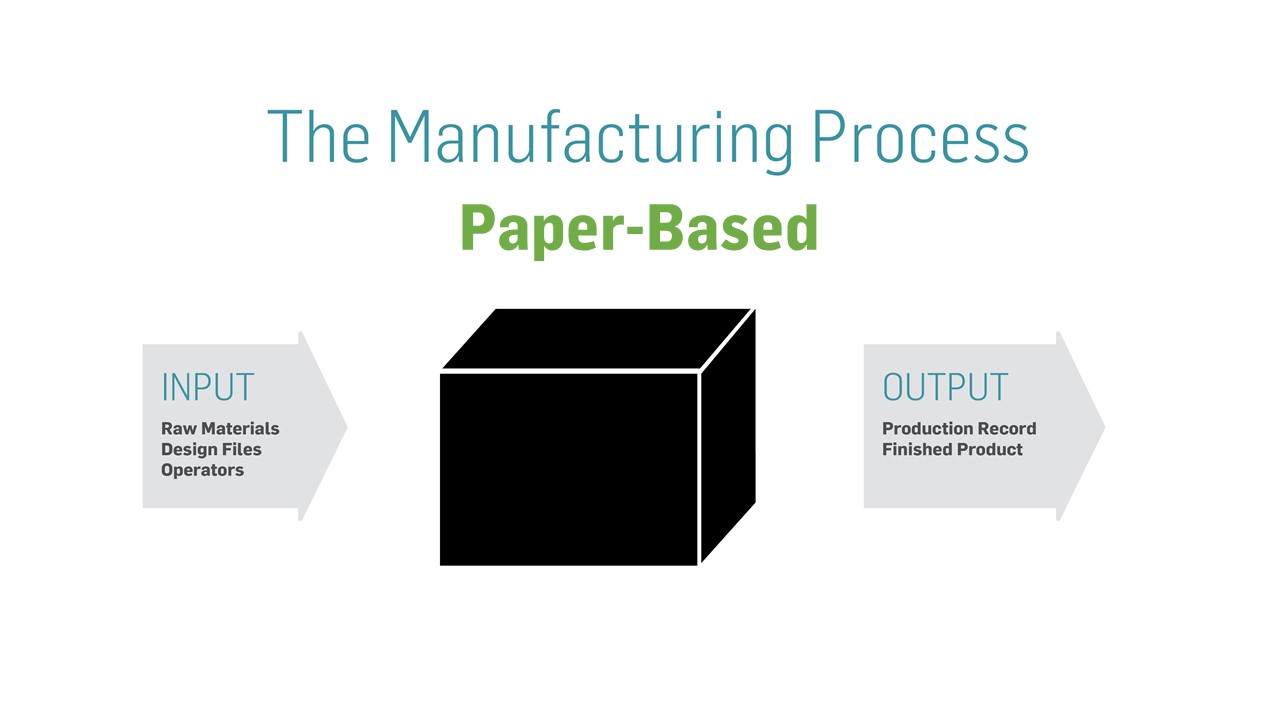 Digitizing the production record provides visibility into the manufacturing process and as-executed data that was previously locked up in paper, including data relating to lines, batches, or lots. Comparative analyses can now be done to support continuous improvement efforts. Comparisons can now compare today’s execution to those yesterday, three months ago, last year, and so on. Similarly, comparisons can be performed between sites, shifts, teams, and so on, unlocking the data needed to improve.

The end-to-end visibility that comes with fully connected production records allows access to new, previously missing datasets in digitized records, including which operator performs a step the fastest with fewest errors or which shift outperforms others.

Closing the digital manufacturing gap by digitizing paper-based production record processes dramatically reduces the human errors inherent with paper and goes beyond that to provide many more business results, including:

Conclusion: Digitize to Build Quality Into the Manufacturing System

Brian Curran is Senior Vice President of Strategic Growth at MasterControl. Curran joined MasterControl in 2002 to direct and expand MasterControl's product development efforts. He has more than 25 years of experience leading the direction for enterprise and entrepreneurial software development companies. Curran began his career with IBM, where he spent five years leading consulting engagements with Fortune 500 companies such as MCI, BellSouth, and many others. After this, he held several director- and vice president-level product management and marketing positions for entrepreneurial software development companies in the telecommunications and web analytics sector. Curran has an MBA with an emphasis in information systems.