Why You Need a Document Management System


A brief history, what they are, and their purpose

For as long as humans have been making groundbreaking discoveries and developing life altering technologies, we’ve needed ways to document, preserve, and share our hard work. A scientific breakthrough is only as good as its repeatability. A new way of doing things can only effect widescale change if it is documented accurately. And regulatory bodies will only let you get so far without a trail of due diligence.

Before we get into the nitty-gritty, here’s a list of some of the benefits of a good document management system.

And now for a little history lesson...

Throughout modern history there have been major advances in the way we store and distribute knowledge. Hard-copy paper in filing cabinets was at one time kind of a big deal. However, it wasn’t without its setbacks. Scanning became part of the lexicon in the 1980s allowing for easier tracking and storage of documents. Adding to that, email sharing and document management software is a more recent development with more room to grow. These have ultimately led to the cloud-based document management storage of today’s advanced digital document management systems.

Get your pencils and whiteout ready.

Back to our old friend hard-copy, paper-based document management systems. The storing and processing of often tens of thousands of paper documents placed a heavy burden (literally) on businesses and organizations. Sifting through all of it was time consuming and, like a misplaced library book on a shelf, it was easy to lose track of hard copies in all that mass. Lost documentation became very common in many industries.

Another big issue with paper-based systems was document sharing and tracking. It’s hard to imagine now, but entire teams of employees were often tasked with physically transferring official documents to multiple approved reviewers, editors, or signees. Times that by a few thousand documents and you’ve got yourself a full-time job. Now add to that the complexity of tracking that documentation. Employees would physically take a document to a reviewer or an approver for a signature. But what if said reviewer was out? Or what if one or multiple reviewers requested further edits before signing off? What if they signed the document but requested that it be routed to someone else later? There were many ways to lose track of documents or forget how a document fit into a business process. It’s relatively easy to keep a single document in mind but hundreds, thousands, or even tens of thousands of documents are another level of complexity that requires additional tools.

When paper was big, document security was also a big task, aka headache. Most companies and organizations couldn’t afford to lock down their documents in expensive environmentally-controlled storage rooms. Instead, they used the more budget friendly, though unsophisticated, system of filing cabinets or storerooms to secure things. Which, as we’ve seen, isn’t the best if you actually need to access and track those documents.

Originally invented in 1957, scanning technology didn’t became part of the document management equation until the 1980s when software developers began utilizing scanning technology to create the first computer-based document management systems. The thinking was, scan those tens of thousands of paper documents into a secure digital environment and allow for searchability of the digital documentation. For many companies this solved the problem of maintaining cold document secure rooms and rows (and rows) of filing cabinets. Now all one had to do was hop on a laptop, business console, or other tech device to find a document. Even for highly regulated industries, where companies were still required to maintain paper documents for a specific period of time, digital scanning was a big step forward and allowed for greater convenience and assurance.

Another boon of the 1980s, document management software came on the commercial scene. Companies began purchasing these new solutions and got rid of their filing cabinets and cleared those storerooms all together—and found new jobs for those poor document routing teams.

Using document management software meant companies could decrease the time spent tracking, organizing, and securing large amounts of scanned and digital assets. They could route documents to the correct approvers and reviews in a matter of seconds and track changes to documents seamlessly.

But there were still document management system problems to be solved.

Email is great for a lot of things. But secure file sharing and version tracking isn’t exactly one of them. Having secure, trackable document management software. gave companies the ability to move away from file sharing via email, reducing the risk of sensitive or proprietary information being viewed by unapproved parties. It gave them the ability to timestamp and validate documentation. It also meant they could limit user access to different levels based on a user’s position within an organization.

Johanna Blair is a marketing content writer at MasterControl, contributing her distinctive voice to varied content including white papers, industry briefs, blog posts, and social media. She has a background in health care and medical education administration, where she witnessed the profound impact life science innovation has on the lives of patients and trainees, daily. She holds a Bachelor of Fine Arts with an emphasis in theatre performance from the University of Utah. 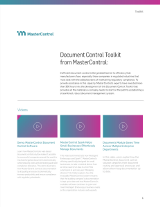