Top 5 Pharmaceutical Trends to Keep on the Radar in 2018 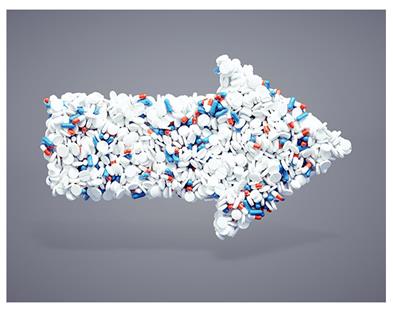 The pharmaceutical industry in 2018 continues to be buffeted from within and without as transformational changes influence manufacturers in a variety of ways. From new technologies, to new pressures, to new methods of drug discovery, the sector is a beehive of activity for which manufacturers must plan for, pivot and re-prioritize. The following are five of the foremost trends pharmaceutical companies can anticipate affecting their business in 2018.

Because of its huge potential to make a major dent in the costs and time required for drug discovery (roughly $2.6 billion and 10 years per new drug), artificial intelligence (AI) is expected to make significant gains as more and more companies invest in the technology.

Pharma goliaths GlaxoSmithKline, Merck and Johnson & Johnson are investing heavily in AI, betting that supercomputers and machine learning systems will be able to build prediction models for potentially promising compounds. Industry experts estimate AI will eventually deliver new drugs much faster and at a fraction of the current cost.

Better yet, it’s not only in drug discovery that AI is expected to make a big splash on the pharmaceutical scene. Myriad applications, such as data mining medical records, designing precision treatment and medication management are also being pursued.

This article is related to the White Paper:
Top 5 Trends in the Pharmaceutical Industry in 2018
To view the full details, please download your free White Paper.

Drug counterfeiting and adulteration continue to be a worldwide bane in the industry as counterfeit prescription drugs are estimated to total $75 billion a year. In response, the U.S. created the Drug Quality and Security Act (DQSA) and Drug Supply Chain Security Act (DSCSA) in 2013, with serialization (the systematic identification and tracking of drugs through their full lifecycle) being a major defense against counterfeiting. Serialization also addresses other supply chain security issues, such as product authentication, disrupting counterfeiters’ business processes and price structures, product mix-ups and gray market challenges.

The linchpin for effective serialization isn’t simply generating unique serial numbers, but also maintaining those identifications for full visibility and traceability in the supply chain. That requires collaboration between partners throughout the chain for accurate reporting, tracking and managing data. This is where an efficient quality management system (QMS) and an automated document control solution can be indispensable.

Serialization remains one of the most important tools pharmaceutical manufacturers have to shore up their supply chain security, says @MCMasterControl http://bit.ly/2qDzRKM

Falsified drugs (those that deliberately or fraudulently misrepresent their identity, composition or source) have led to tens (and possibly even hundreds) of thousands of deaths in developing countries where the drugs are used to treat diseases, such as pneumonia and malaria. Falsified and substandard drugs are often produced in unsanitary conditions and contain unknown impurities and bacteria.

Falsified drugs have led to tens of thousands of deaths in developing countries where the drugs have been administered to fight diseases, says @MCMasterControl http://bit.ly/2qDzRKM

In the U.S., the Food & Drug Administration (FDA) regulates the quality of pharmaceuticals through batch testing and ensures they’re safe and effective through current good manufacturing practices (CGMPs). If a company doesn’t comply with CGMP regulations, any drug it makes is considered “adulterated.” Between 2015 and 2016, the FDA’s Office of Manufacturing Quality (OMQ) issued more than double the number of warning letters and import alerts to pharma companies than previously. OMQ also identified five recent warning letter trends:

When a 2012 multi-state outbreak of fungal meningitis in New England killed 64 people and sickened 800 from contaminated steroid injections, the U.S. Congress enacted the 2013 Drug Quality and Security Acts (DQSA). The legislation gave the FDA more teeth to regulate compound drug manufacturing. Compounding drugs are made by state-licensed pharmacists when patients’ treatment requires a variation from what’s available from stock drugs.

However, things came unglued when groups representing 503Bs (bulk outsourcing facilities, which require FDA oversight and extensive funding to operate), asserted that many traditional compounding pharmacies (503As) were producing compounding pharmaceuticals in bulk and sending them across state lines without a prescription and in violation of the law. They also claimed that many 503As were failing to voluntarily register with the FDA.

More recently, the FDA clarified existing rules and regulations, and said it would begin encouraging more compounding pharmacies to register as 503Bs and take actions to prevent them from copying existing medications and producing them in bulk. The agency also plans to refine a memorandum of understanding for regulations and communications with individual states to address the issue of illegally shipping across state lines and to give states more time to report potential issues.

A 1,000-page law called the 21st Century Cures Act was passed by the U.S. Congress in December 2016. Two elements of the legislation were planned to both ease and speed up the FDA’s drug approval process with the intent of getting treatments to patients faster. The Center for Bipartisan Policy had called the existing drug approval procedure, from clinical development to market availability, “long and expensive.”

However, critics balked at the interpretations that the 21st Century Cures Act allows the FDA greater discretion regarding the types of studies and endpoints that drug companies may use to evaluate new medicines. Some see the law as an attempt to circumvent the industry standard of evidence-based clinical study trials for approval in favor of less rigorous surrogate endpoints or real-world evidence (RWE). RWE might consist of biomarkers, such a patient’s subject feedback about a drug.

Other groups consider that perspective inaccurate and insisted that the law simply included other forms of “pro-patient, science-based reforms” that will drive market competition and create greater efficiencies in drug development. Ned Pagliarulo, in an article in BioPharma Drive, posited that RWE “won’t supplant” information gathered through randomized clinical study but help find new uses for drugs already on the market.