Brexit and the Impact on the IVD and MD Industries

The United Kingdom (UK) leaves the European Union (EU) on January 1, 2021. Manufacturers wanting to begin or continue business within the UK need to understand the implications of this move and should start making preparations today.

Since the results of the referendum held on June 23, 2016 decided that the people of the UK would prefer to leave the European Union, the term “Brexit” has become standard terminology. The British (BR) people will leave (EXIT) the EU.

However, the exact implications were unclear for a long time. There has been a long discussion to decide whether UK would prefer a soft Brexit, with minimal political and business implications, or a hard Brexit, where they will clearly differentiate themselves from the other countries.

It recently became clear the UK favors a hard Brexit. New rules with a profound impact on the international business community go into effect on January 1, 2021. As with all sectors, the IVD and MD industry will see significant changes. Manufacturers should definitely start preparing if they intend to continue their business in the United Kingdom after 2020.

Impact on the IVD and MD Industry

The UK government is poised for a hard Brexit, meaning the UK becomes a third country. This has serious consequences on the IVD and MD industry:

The new regulations that amend the UK’s Medical Device Regulation laid down by UK parliament at the beginning of 2019 introduced the concept of a “UK Responsible Person” Similar to the European idea of an Authorized Representative, the UK Responsible Person would act on behalf of a manufacturer established outside the UK.

The UK responsible person must ensure that the declaration of conformity and technical documentation have been drawn up. He shall also cooperate with the Secretary of State on any preventive or corrective actions (CAPA) regarding to the products and inform the manufacturer about complaints and reports about suspected incidents related to a device for which they have been designated. 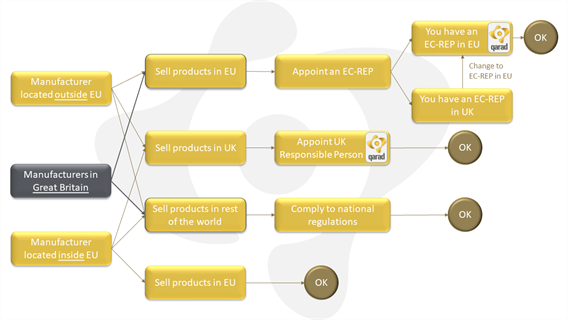 The impact of Brexit on the IVD and Medical Device industry should not be overlooked. Non-UK manufacturers that intend to (continue to) sell their products in the UK after January 1, 2021, must appoint a UK Responsible Person as soon as possible. It is highly recommended to choose an independent organization over UK distributors to separate your commercial and regulatory interests in the United Kingdom.

Dr. Dirk Stynen is Owner, President and Principal Consultant at Qarad. The company specializes in regulatory affairs and quality systems for the IVD and Medical Device industry. Based on his years of experience in the field, he developed Qarad’s eIFU solution in 2008.

The implementation of an eIFU solution becomes considerably less burdensome by working with a reliable supplier, who not only offers a ready-to-use, fully compliant eIFU solution, but who also understands the full context of an implementation project and provides the manufacturer the necessary support in validation, risk assessment, labeling and more. With such a partner, the manufacturer is not alone and what first looked impossible, suddenly becomes a solution within reach.