This article was originally published in ASQ.

In the spring of 2006, Ray Wilson, an internal business systems analyst for an investor-owned utilitycompany, faced a monumental challenge: how to go about transferring the management of approximately750,000 documents on paper, Mylar, microfiche, and other media from more than 150 differentfacilities to one centralized location.

He was also responsible for helping to determine which documents should be retained, creating asearchable database, and maintaining the data files that resulted from the effort.

An investor-owned utility company needed totransfer the management of 750,000 documents from more than 150 different facilities to a centralized location.

Although the scope may have been once-in-a-lifetime, at the heart of the task was a common problemfor engineers everywhere-content management for engineering drawings.

In a world that is becoming more and more accustomed to electronic searching, sliding file cabinetdrawers open and thumbing through hard copy documents is antiquated. Physical documents consumenot only valuable space but also time, as locating and accessing needed drawings or specifications canbe difficult. To address the need for organizations to take advantage of Information Age electronicstorage and search capabilities, the field of document management has emerged as a specialty.

When undertaking a conversion project, an organization typically will choose either to convert all documentsright away, making the change from an existing storage and retrieval approach to a new approach, or to convertindividual documents as they are retrieved and used, gradually completing the conversion over time.

Wilson had roughly one year to transfer the documents to an independent transmission company.

About the Engineering Documents

Wilson's organization and its parent company work together to supply electricity to customers acrossLower Michigan. The documents the independent transmission company had to absorb were currently housed in the basement of the parent company's headquarters and at about 150 electrical utility substations scattered acrossLower Michigan. Included were engineering drawings, inspection and maintenance histories, lists of stock items and spare parts, vendor information, guidelines involving wetlands and endangered species, and patrol maps.

The goal was to sort through all of the documents, convert what had to be retained to electronic files, and index those files in a searchable database. The effort would require a long-term paper storage and destruction solution and backup. Power companies typically make arrangements to buy power from other utilities to meet the load demand, so personnel were acquainted with the need for redundancy. Critical documents would need to bestored electronically in at least two places.

Documents pertaining to wetlands and endangered species listed environmental factors such as the location of Indiana bat and bald eagle nesting sites. These needed to be considered when engineers and crews were working on construction or repair projects in certain areas. "At one of our sites, workers had to contact a fish and wildlife professor at the university to determine whether a bald eagle nest was empty," Wilson said.

Compliance and regulatory issues also needed to be identified and addressed, including standards established by the North American Electric Reliability Corporation (NERC).

Additional challenges included labeling and categorizing information and developing a classification system that would ensure the right documents could be surfaced by users when needed. No form of classification currently existed.

Considering the wide variety of documents to be transferred and aware of the many types of information they contained, Wilson knew he needed to start with a solid understanding of end user requirements. To get his arms around the project, he used a number of quality tools including process mapping and fishbone analyses.

He observed the work of engineers, control room personnel, and field technicians to learn more about their jobs and to map how they used drawings and other documents. When he saw documents being handled, he'd stop personnel and ask questions such as: What document did you just take out? What document did you just file? How did you use it? This helped him add details to the process map.

Wilson created the fishbone diagram in Figure 1 to help team members and stakeholders work more effectively with all of the details and disparate interests. The fishbone helped demonstrate what was needed to proceed, what support was available, and how to put the entire effort together. With the important goal of transferring all documents from the parent company as efficiently and effectively as possible, the fishbone, says Wilson, "was crucial in helping the team avoid stepping on toes, achieving compliance, and meeting quality checks." 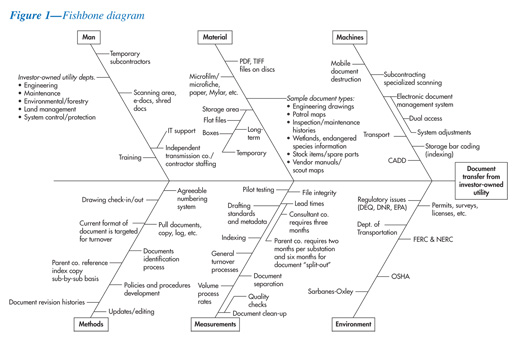 Complicating matters was the reality that Wilson and his team were dealing with two different organizational cultures. The utility had roots stretching back to the 19th century, and the independent transmission company, one of only four in the country, was formed more than 100 years later in 2002.

"This meant we were working with two completely differentways of doing things and trying to direct everyone toward acommon goal," Wilson said.

The effort involved a range of professionals, including nuclearengineers and transmission distribution experts. Many of the specialistsand technicians who used the documents involved in theproject were accustomed to certain ways of working and weren'tenthusiastic about changing.

To aid the transition process, encourage cooperation, and createbuy-in, Wilson regularly met with stakeholders and employeesfrom both organizations to identify their respective needs andobjectives. He found that personnel from different areas such asplanning, construction, project management, the operations group,and quality management brought different views to the projectand had their own opinions on what would be the best solution.

Some veteran utility workers felt more comfortable workingwith physical drawings and documents, even though the newerand more efficient way was to carry a laptop that would offeraccess to all needed information. "Technicians were used towalking around with drawings tucked under their arms, and wewere proposing something radically different," said Wilson.

Most control room specialists also wanted to have physicaldrawings close at hand. To them, hard copies seemed more permanentand authoritative, and they were reluctant to think abouthaving to verify information using a laptop.

Knowledge transfer was another challenge. "Most parent companyworkers had decades of experience, so one of our goals wascapturing their know-how and making it available to the nextgeneration," Wilson recalled. "In some cases, we were lookingto put informative notations right on the drawings."

Retirement dates were studied and meetings held in an effort torecord information before an individual left the utility. In additionto exit interviews covering process and technical expertise,a 90-day, post-retirement window was established to continuetalking with retirees.

A three-pronged approach was proposed: 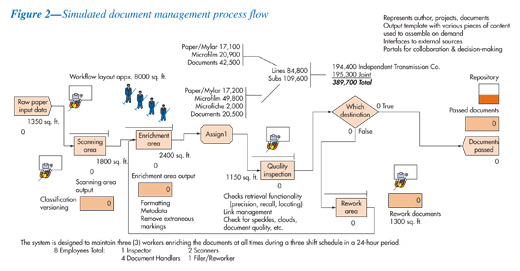 During the planning stages, Wilson and his team reliedheavily on simulations, especially for the complex task ofconverting the documents. Many of the originals were morethan 80 years old, with some dating back to 1899, so reducinghandling prior to scanning would help protect the fragilematerials from damage.

Figure 2, the simulated document management process flow,provides an overview of the steps involved in converting thedocuments. Wilson mapped a workflow layout of approximately8,000 square feet and projected the time required to move all750,000 documents through the process. If four or five peopleworking in shifts covered 24 hours per day, he determined, sortingand digitizing the documents and creating a cross-referencewould take 69 weeks. From there, he figured in time for breaks,weekends, and holidays. Again, process mapping proved usefulin capturing critical details of the sorting and conversion process,helping identify and address issues related to planning, financialincentives, safety, and scheduling.

Based on the simulation, Wilson estimated that the immediate impacton the bottom line would be a savings of $2,500 in the first year.

Before any document conversion and storage could begin,Wilson worked on establishing the classification system thatwould make the documents accessible in searches. Because noform of classification had been in use, Wilson first had to convincestakeholders and the management team of the importanceof this step to an orderly turnover process and to long-term documentmanagement.

Having learned of an earlier successful attempt to create a constructionlist database, Wilson decided to use it as the basis for the newsystem. He added classification fields to address key informationneeds uncovered in his meetings with stakeholders, developing aunified system that would work through the entire field.

In 2006, planning for the project was completed and a pilotprogram conducted. Hardware was implemented, softwaredebugged, and personnel trained. Documents started arriving insemi trucks, and scanning and indexing began.

As they digitized the documents, Wilson's team sought to enricheach drawing. Although they were working on a deadline, theyrecognized that converting physical drawings to electronic filesoffered the opportunity to bring older drawings up to code andadd data such as inspection histories and instructions on locatingand accessing substations.

Beyond the conversion of the originals, the team was responsiblefor destruction of documents that were outdated or no longerneeded, and for establishing a clear and accurate versioning process.Crews in the field who were troubleshooting or workingon repairs, additions, or new installations needed to be assuredthat they were accessing not only the correct drawing but alsothe most appropriate version of that drawing-usually, but notalways, the most recent update.

The final step was to notify users of the data that were nowavailable to them and teach them how to find documents in thenew system. To close the feedback loop, the team developeda recommender process. When users accessed drawings, theycould recommend additional information to record. 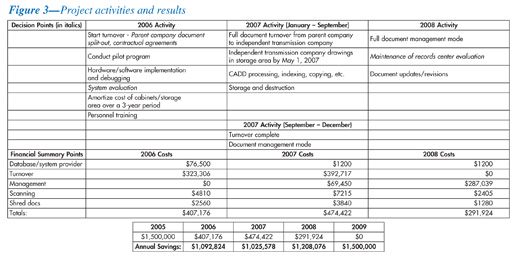 As shown in Figure 3, full document turnover was completed byDecember 2007. The primary focus in 2008 was on documentmanagement, including making ongoing updates and revisions todocuments.

The project was also a financial success. Savings added up toapproximately $1.1 million in 2006, $1 million in 2007, $1.2million in 2008, and $1.5 million in 2009. Further confirmationof success came in 2009 when a competitor purchased the utilityand continued to use the document management program theteam developed.

Ted Schaar is a freelance writer who has written on quality topicsranging from statistical process control to 5S. A graduate of theUniversity of Wisconsin-Madison, he resides in Brookfield, WI.