The views expressed in this article are those of the author and do not necessarily represent those of his/her employer, GxP Lifeline, its editor or MasterControl, Inc.

With the goal of optimizing collaborations in the drug development industry, Nice Insight (http://niceinsight.com/) developed a quarterly survey to measure customer awareness and customer perception across 300+ contract research and manufacturers. Nice Insight's Q4 Pharmaceutical and Biotechnology Outsourcing Survey generated responses from 2,619 outsourcing-facing executives from big pharma (29%), specialty pharma (17%), emerging/niche/start-up pharma (22%), biotechnology (25%), and emerging biotechnology (7%). In addition to creating a research tool that aids sponsors in the outsourcing partner selection process and enabling CROs and CMOs to understand their position within the industry, Nice Insight also garners broad industry trends from its survey data.

Results from Nice Insight's Q4 2011 survey indicate that the top five services outsourced by pharmaceutical and biotech companies vary between different customer segments within the industry. For example, hiring consultants was reported as the most frequently outsourced service overall and across every segment with the exception of emerging biotech (where it ranked third). As consultants may be engaged for myriad reasons, the tables and this article include the top five services for each customer segment in addition to consulting. 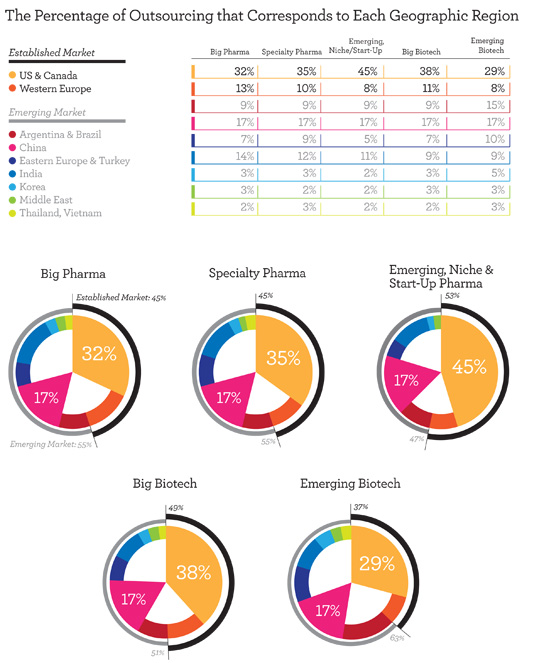 Almost one half (48%) of survey respondents indicated their business would hire consultants in 2012. In looking at the overall data, it appears that 40% of the industry intends to outsource pharmaceutical analytical testing in the current year. This service is predominantly sought out in established markets, with 69% of those who will outsource analytical testing reporting a preference for companies in this market segment. However, one quarter of respondents indicated that market alone was not a factor when selecting a CRO or CMO for analytical services.

Clinical research rounded out the top three most frequently outsourced services, with 38% of respondents indicating they would outsource this service in 2012. While the majority, at 60%, indicated they would partner with a business in an established market, almost one-fifth of respondents reported they look to emerging markets when recruiting CROs. With 19% of respondents who subcontract clinical research indicating emerging markets are preferred for this service, it is the second most popular project type to send overseas.

In looking at the overall data, it appears that 40% of the industry intends to outsource pharmaceutical analytical testing in the current year. This service is predominantly sought out in established markets, with 69% of those who will outsource analytical testing reporting a preference for companies in this market segment.

It was interesting to observe preferences among respondents with respect to market and services. For example, when looking at the industry overall, there was a notable preference for outsourcing to established markets that ranged from 51% for chemical synthesis to 69% for analytical testing. Yet, when respondents were asked to indicate the percentage of their outsourcing that corresponds to each region, 47% was allocated to established markets, 36% to the U. S. and Canada and 11% to Western Europe. China (17%) and India (11%) comprised the bulk of outsourcing to emerging markets. South America and Eastern Europe followed with nine and seven percent respectively, while the Middle East, Korea and Thailand currently receive two to three percent of projects. This suggests that while there is a preference for established providers, other factors also influence partnership decisions.

When comparing the outsourcing behaviors of pharma companies to biotech/biologics companies, observable differences emerge. Within the three pharma segments (big, specialty, and emerging/niche/start-up)the data showed that five of the top six outsourced services were the same, with some variance in ranking. Four of these services overlapped with the outsourcing needs of biotech/biologics companies. As was previously mentioned, consulting services ranked highest overall and as number one across each of these segments, excluding emerging biotech companies. Clinical research, analytical testing and bio-analytical testing rounded out the top four across all customer groups. However, pharma segments frequently outsourced regulatory support, whereas biologics segments were more likely to outsource chemical synthesis.

Not surprisingly, big pharma companies tended to exhibit less preference for established market providers and were more likely to indicate that market was not a factor in the partner selection process. That being said, big pharma still allocated almost half (45%) of their outsourcing to businesses in the U.S., Canada and Western Europe. Also, just less than one-third of big pharma's outsourcing was completed in China (17%) and India (14%) combined. Thirty-five percent of big pharma respondents indicated they would outsource clinical research in 2012, and despite the benefits of conducting clinical trials in emerging markets, almost half (49%) of these respondents still indicated a preference for CROs in established markets. This may be attributed to the fact that 51% of big pharma respondents who have outsourced clinical trials to emerging markets encountered added complications due to language barriers.

Big pharma respondents were also very likely to outsource analytical testing services (33%) and showed a strong preference to providers in established markets (57%). However, as a whole, this customer segment was more likely to state that "market was not a factor" in selecting an outsourcing partner than each of the other groups. As such, 29% were not concerned about market when choosing a CRO or CMO for analytical projects. The big pharma customer segments' top services outsourced differed from the other pharma customer groups with respect to drug delivery systems. For example, one quarter of big pharma respondents indicated they would outsource drug delivery in 2012, which was considerably higher than the specialty pharma (16%) and emerging pharma (12%) customer segments.

Specialty pharma respondents showed the strongest preference for contractors from established markets among the three segments of pharma customers. Of their top outsourced services, established markets were preferred 66% of the time for clinical research and regulatory support and 77% of the time for analytical testing. Clinical research and analytical testing were also the most frequently outsourced services at 37%, and 34% respectively, after consulting, at 42%. Bio-analytical testing (25%) and regulatory support (21%) and fill & finish (19%) comprised the remainder of the top positions. With approximately one in five specialty pharma respondents indicating they would outsource fill & finish in 2012, this service was uniquely popular among this customer segment.

Biotech and emerging biotech companies also exhibited differences in outsourcing behavior when compared to the three pharmaceutical segments. The key difference being that pharma companies tended to outsource regulatory support as one of their top services, whereas biologics companies more commonly outsourced chemical synthesis. This data is useful for contract service providers that are looking to develop new chemical synthesis business as their focus would be better served with the biologics segments of the drug development industry.

Like the other customer segments, biotech/biologics companies showed a preference for businesses in established markets, especially among consultants (65% vs. 12% for emerging markets) and analytical testing providers (68% vs. 11%, respectively). It is also worth noting that approximately one in five respondents within the biotech customer group indicated that "market was not a factor" in selecting an outsourcing partner for the most frequently outsourced services. When it came to the actual allocation of outsourced projects/budget by region, biotech companies allocated a higher percentage to the U.S. and Canada (38% vs. 29%) and Western Europe (11% vs. 8%) than their emerging biotech counterparts. As a matter of fact, 63% of emerging biotech projects were outsourced to emerging markets compared to 51% of biotech projects.

The Nice Insight Pharmaceutical and Biotechnology Survey is deployed to 40,000 outsourcing-facing pharmaceutical and biotechnology executives on a quarterly basis/four times per year [Q4 2011 sample size 2619]. The survey is comprised of 1000+ questions and randomly presents approximately 30 questions to each respondent in order to collect baseline information with respect to customer awareness and customer perceptions regarding 300 companies that service the drug development cycle. Over 1200 marketing communications, including branding, websites, print advertisements, corporate literature and trade show booths are reviewed by our panel of respondents. Five levels of awareness from "I've never heard of them" to "I've worked with them" factor into the overall customer awareness score. The customer perception score is based on six drivers in outsourcing: quality, accessibility, regulatory compliance, pricing, productivity, and reliability, all of which are ranked by our respondents to determine the weight applied to the overall score.

Kate Hammeke is the Research Manager at Nice Insight. As Research Manager, Kate designed the first industry-wide study on selecting outsourcing partners during the drug development cycle for the pharmaceutical and biotechnology sector.