As clinical research professionals, we often hear phrases like, "It's in the regs!" Or, "It's GCP!" At times, it may seem as though by classifying our actions as "GCP," we wave a magic wand that ensures regulatory compliance. But what is GCP, and what does it mean to be GCP compliant? In order to take "good" to "great," it is important understand the conceptual framework that supports good clinical practice and be able to apply that understanding in daily research practice.

Good clinical practice is more than any one document; rather, it is a collective compilation of many thoughts, ideas and learning moments spanning the globe over.

A comprehensive representation of the development of good clinical practice can be found in a literature review of the Declaration of Helsinki, the Common Rule, the Belmont Report, the World Health Organization Guidelines for GCP, the International Conference on Harmonization, and the FDA Code of Federal Regulations. This is by far not a complete list of the regulatory documents that comprise GCP, but rather an excellent launch pad into the conceptual framework within which research professionals must comply. 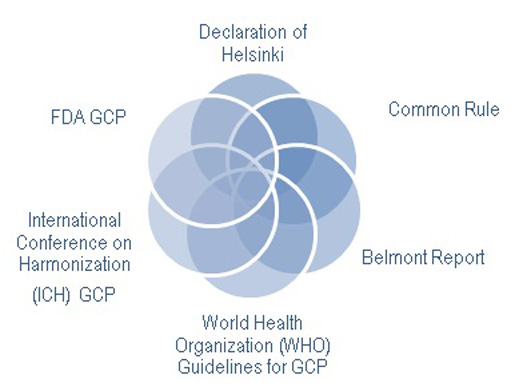 The Belmont Report is one of the most important documents in the GCP library. This document was authored over the course of a four-day summit in April of 1979, held at the Smithsonian Institute. The summit was attended by members of what is now termed as the Department of Health and Human Services, and was a response to the outcry over public realizations of serious research misconduct. 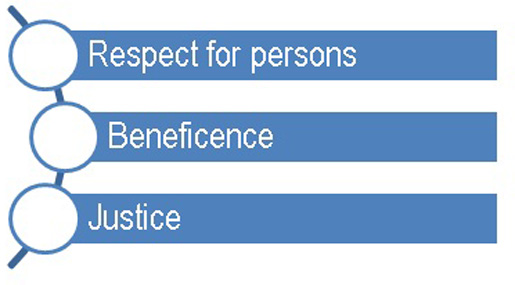 The first ethical principle describes the concept of respect for persons. According to the Belmont Report, individuals should be treated as autonomous agents, and persons with diminished autonomy are entitled to protection.

The second ethical principal describes the concept of beneficence. Individuals should not only be protected from harm, but efforts should be made to secure their well-being. Not only should research professionals seek to do no harm, but also have an obligation to actively do good on research subjects' behalf.

The third ethical principal describes the concept of justice, which can be broken down into three points. First, subjects should not be selected because of their easy availability, compromised position, or manipulability. Second, research that is supported by public funds to develop therapeutic devices and procedures should not provide advantages only to those who can afford them. Third, research should not involve persons from groups that are unlikely to be among the beneficiaries of subsequent applications of the research.3

WHO Guidelines for Good Clinical Practice

The World Health Organization released its Guidelines for Good Clinical Practice as a reference handbook intended to aid regulatory authorities, sponsors, investigators and ethics committees in implementing good clinical practice in clinical research. It is comprised of international guidelines, and addresses the following topics:

The International Conference on Harmonization was a collaborative international effort to unify standards for clinical research in the European Union, Japan and the United States. The Guideline for Good Clinical Practice established thirteen guiding principles of good clinical practice, and is one of the most widely-used regulatory documents governing conduct and procedure in clinical research today. These guiding principles can be grouped into five major concepts:5 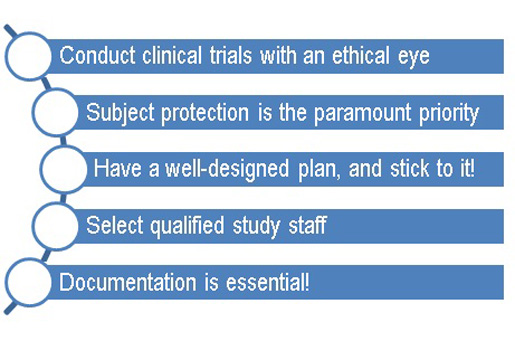 In the United States, the group of regulatory documents that bears the weight of law can be found in the Code of Federal Regulations, Title 21. These are a collection of documents that address the roles and responsibilities of each stakeholder in the research process:

A Practical Application: Why do We Need GCP Regulations?

Unfortunately, there are multitudes of sobering examples as to why GCP regulations are a necessity. For each of the following examples, the violations against good clinical practice were considered completely justified by the researchers involved. Even more sobering is the realization that examples of serious research misconduct continues to this day, as can be observed by studying the warning letters available for public review on the Food and Drug Administration website.7 The following provide a sample of some of the more serious examples of research misconduct:

It is common knowledge that Nazi physicians conducted large-scale trials on unwilling and coerced prisoners during the dark years of World War II. These trials studied twins; transplantation; head injury; the effects of freezing; malaria; mustard gas; sulfonamide; exposure to sea water; sterilization; the effects of poison; incendiary bombs; and the effects of high altitude. The majority of test subjects died as a result of their participation in these experiments, and survivors suffered permanent mental and/or physical injury.

Twenty-three Nazi physicians involved in human experimentation were tried at Nuremburg, and most were held accountable for their crimes. These physicians justified their actions by stating that there was no international law regarding medical experimentation, so therefore their actions were legal. It is of note that our knowledge of how the human body reacts to freezing and the effects of phosgene gas are based entirely on Nazi experiments, and this data is still used today.8

Unit 731 of the Imperial Japanese Army conducted similar experiments on unwilling and coerced subjects. These experiments focused on biological warfare and the development of weapons of mass destruction, and lead to the deaths of more than half a million research subjects. After the war, General Douglas MacArthur offered immunity and assurance that information regarding the trials would not be used as war crimes evidence in exchange for exclusive access to the data generated by these trials. The physicians involved in the research conducted by Unit 731 received full pardons from the United States, and many achieved great post-war success in politics, academia, business and medicine.9

The Tuskegee Syphilis Study was a federally-funded study that compared the effects of treated and untreated syphilis in African-American men. Between the years of 1932 and 1972, nearly 400 impoverished and illiterate African-American men were not informed of their syphilis diagnosis, lied to about placebo treatments they received, denied effective treatment for their disease, and denied the process of informed consent. As a result of participation in this study, 28 subjects died of syphilis, 100 subjects died of complications relating to syphilis, 40 subjects' wives were infected with syphilis and 19 children were born with congenital syphilis. The researchers involved in this study justified their actions as "for the greater good of science."10

In a more recent example of non-compliance with good clinical practice, a trial concluded in 2002 enrolled more than 24,000 subjects to test Ketek, an antibiotic developed by the pharmaceutical giant now known as Sanofi-Aventis. The trial, known as Study 3014, was revealed to be riddled with fraudulent data. One physician in particular, Dr. Maria Kirkman-Campbell, was found guilty of conducting fraud with regards to falsified enrollment of patients and fraudulent consent forms.11 In 2004, Dr. Kirkman-Campbell was sentenced to 57 months in prison, fined $557,251 and ordered to reimburse the study sponsor a sum of $925,774.12 In testimony before the House Committee on Energy and Commerce in 2007, the monitor who uncovered the fraud alleged that Sanofi-Aventis was not a victim of Dr. Kirkman-Campbell's fraud, but rather a knowing accomplice. This accusation was confirmed in a 2007 warning letter issued to Sanofi-Aventis.13 Further FDA audits identified nine other high-enrolling sites of Study 3014 as having serious problems. However, the issue of data integrity was not raised during the internal review process of Ketek at the FDA, and the drug was approved in 2004.

Ketek is associated with severe problems, including 23 cases of severe liver injury, 14 cases of liver failure, 4 deaths, and issues with vision, blackouts, syncope and possibly-fatal cases of myasthenia gravis (an autoimmune disorder causing muscle weakness). Amid significant internal debate, the Food and Drug Administration allowed Ketek to remain on the market, but reduced its approved indications and updated its labeling with a black-box warning in early 2007. Before its indication reduction in 2007, Ketek earned Sanofi-Aventis nearly $400 million in sales.14

In the end, these examples of the failure of researchers to comply with the concepts of good clinical practice demonstrate a great regulatory need. History proves that research professionals can't always be trusted to do the "right" thing; indeed, sometimes the "right" thing is more complicated than we think.

Who is Responsible for GCP?

Each and every person involved in the research process is responsible for adhering to the principles of good clinical practice. This includes:

Taking "good" to "great" requires a commitment on the part of all clinical research professionals. Certainly having historical perspective and a firm understanding of GCP requirements is a good start, but equally important is knowing how to document what we do. Probably the best acronym for guiding researchers through proper documentation is "ALCOA." Having its roots in the federal regulations governing good laboratory practice for non-clinical laboratory studies, or 21 CFR 58.130.15 "ALCOA" was coined by Stan Wollen during his tenure at the FDA's Office of Enforcement.16 It remains the practice of FDA auditors and quality assurance professionals to use the ALCOA acronym as a guide for their expectations regarding clinical practices:

While the regulatory details of good clinical practice might seem overwhelming, the fact remains that we need GCP. Researchers cannot always be trusted to do the "right" thing, and sometimes the "right" thing is more complicated that we expect. The responsibility of compliance with good clinical practice regulations falls with each person involved in the research process.

Remember to make your "best" good clinical practices part of your daily habit. Federal auditors and quality assurance professionals use the acronym "ALCOA" as a guide for high-quality research data; this is an important tool that should be familiar and natural to researchers.

While there are many documents that frame up the concept of good clinical practice, it is important to remember that GCP is more than a piece of paper or a set of rules. Good clinical practice is a mindset of dedication that ensures a high level of ethics and quality in research. Advances in the field of medicine are dependent on the quality of research that is conducted. The price for complacency is high; history provides a multitude of haunting reminders of our failure to uphold our obligation to good clinical practice.

Rebecca York is a Clinical Research Associate with IMARC Research. She has experience in therapeutic areas including but not limited to stress-urinary incontinence, thoracic and aortic aneurysms, and neurolotic stimulation devices. In addition to her monitoring responsibilities, Rebecca lends her passion for research to training efforts within and outside the company.